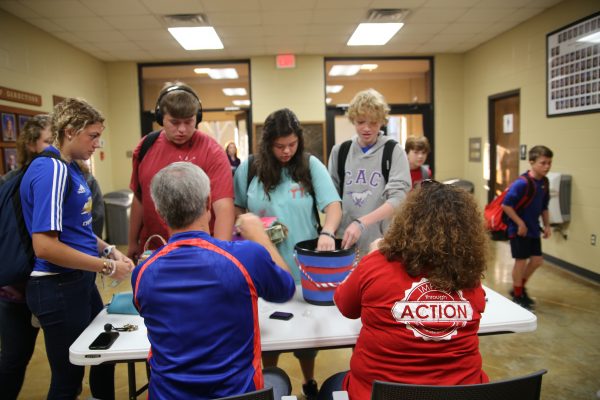 Say the words “Fill the Boot” to any student at the Secondary Campus, and you’ll see their eyes light up. Ask them what it means, and they’ll most likely respond with the words “Lagosette School” or “Mustang Missions” or “Haiti.”

Each September, as a part of the student-led organization Mustang Missions, CAC students open their wallets and “Fill the Boot” with cash to help children at the Lagosette School buy shoes to complete their school uniforms. This time of giving has been a tradition, and an event that students of all ages look forward to each year.

So, where did it all begin?

In 2011, Manna Global contacted Bible teacher Danny Sullivan looking for new fundraising options. Many of their donors were shifting focus, and the Lagosette School needed help.

“They contacted me because Karen and I had visited recently, and I had mentioned Mustang Missions,” Danny said. “They asked if our students would be interested in using a month of Mustang Missions to help the Lagosette School. That year specifically there was a big need for shoes. They didn’t want us to buy shoes and send them over– the whole point is to buy shoes made in Haiti, so that it helps the economy as well as provide shoes for the students.”

The Mustangs quickly latched on to the project, and have donated $27,000 in the last six years.

“My favorite part about it is that there’s no big gimmick,” Danny said. “We don’t sell anything, and our students don’t get anything out of it. It’s just simple. These kids bring $20 in and just drop it in the boot. That’s crazy. And what’s even cooler? There’s a 99% chance that our kids will never meet the kids they are helping, and that’s powerful.”